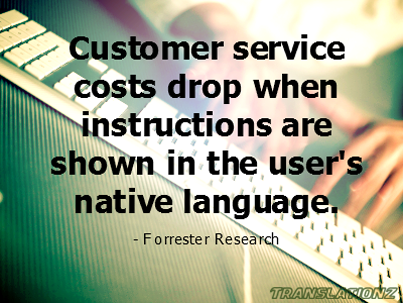 Do you need a Cambodian translator?  Perth is the capital of the west.  It's beauty, climate and economy have attracted many people to move from the East coast.  Western Australia is an export power within Australia.  International business, visitors and migration from the east coast migration all mean that there is a great need for Perth translator services. Cambodian translators are very specialised and you need to ensure that you get the right person for your work.

Many individuals also require a Perth translation service.  Whether you need a personal letter translated, a marriage certificate, birth certificate or any other document certified, Our translators at Translationz can help you.  Click on the button on the upper right to receive a free quote.  Our Perth translator service is extremely competitive and offers the option of rapid turnaround time.

Cambodian Translationz provides Cambodian translator and Cambodian interpreter services to businesses and individuals in Australia and around the world. Our translators are professional, fast and accurate in all aspects of Cambodian language translation. 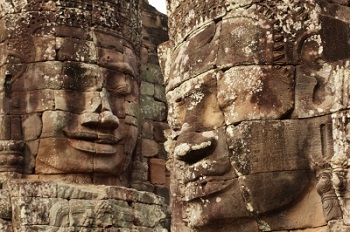 The official language of Cambodia and the Khmer people is Cambodian or Khmer. It is the second most widely used Austroasiatic language (the first being Vietnamese), spoken by ten million people. The Khmer language’s Sanskrit and Pali influences were to some extent a result of the spread of Hinduism and Buddhism in Cambodia. Khmer is prided with being written and recorded earlier than the Mon-Khmer family of languages, even before Mon and Vietnamese. In fact, Thai, Vietnamese, Laotian, and the Chinese languages were all influenced by the Khmer language, and vice-versa. This intermixing was inevitable due to the close geographical proximities and similar cultural backgrounds, which resulted in a linguistic convergence in the Southeast Asian region.

An analytic and isolating language, Khmer does not have any conjugations, inflections, or case endings, but has particles and auxiliary words for grammatical relationships. Similar to Burmese, Khmer also follows the subject-object-verb word order. But unlike Burmese, the Khmer word patterns have a minor syllable succeeded by main syllable, similar to Mon-Khmer.

Khmer is not a tonal language; therefore, it differs from its neighbouring languages such as Thai, Burmese, Laotian, and Vietnamese, which are all tonal languages. The script of the language is written with an abugida, which is known in Khmer as អក្សរខ្មែរ. 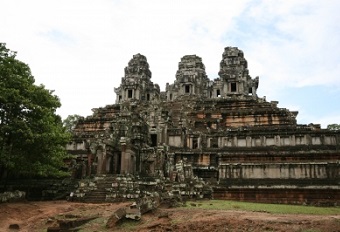 The Cambodian script uses what are called Khmer letters, all probably derived from various forms of the ancient Brahmi script of Southern India. The Cambodian script has symbols for thirty-three consonants, twenty-four dependent vowels, twelve independent vowels, and several diacritic symbols. Most consonants have reduced or modified forms, called sub-consonants, when they occur as the second member of a consonant cluster. Vowels may be written before, after, over, or even under a consonant symbol.

Some efforts to standardise Khmer spelling have been attempted, but inconsistencies persist, and many words have more than one accepted spelling. A two-volume dictionary prepared under the direction of the Venerable Chuon Nath of the Buddhist Institute in Phnom Penh is the standard work on Khmer lexicography.

Over time, Khmer writing has been made much more complex and difficult to read due to the addition of letters and extra swirls and lines to the letters. The original Hindi language is a root language not only of Khmer, but also of Thai, Laotian, and Burmese. While the written system of the language has many similarities throughout all of these countries, the numbers are strikingly similar or even identical.

Khmer is written from left to right, top to bottom, withnospacesbetweenthewords, and with very little punctuation. There are three styles of writing: a script type which is used in handwriting, a block form used in books, magazines, and newspapers, and a rounded style used on signs, titles of books and magazines, and in official documents or formal invitations.

The spoken language has no regional dialects, but the people from the countryside do speak a little differently than the people in the cities.

Contact us for your Cambodian translation using our professional translators.

Translationz also provides experienced Cambodian interpreters. Interpreters will come to your site or work over the phone or web. Our Interpreters are articulate, perceptive, professional and presentable and will easily adapt to the situation.

We are specialists in our Cambodian interpreting across Australia.